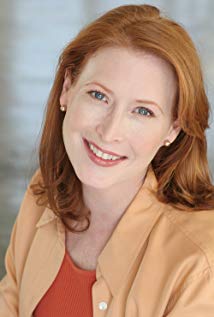 Texas-based actor Wendy Powell absolutely loves what she does, performing in all forms of media: film, television, radio, narration, and video games. But where her character-creating skills truly come to life is in anime! Mirroring the shapeshifting abilities of her iconic Fullmetal Alchemist role Envy, she changes her voice into anything and everything imaginable, including quirky robots, mysterious omnipotent aliens, little old fox ladies, wispy exorcists, and everyday human beings.

Wendy attended Texas Christian University, majoring in Theater. She’s also an alumna of the Disney College Program, studying editing on The Rocketeer and The Rescuers Down Under. After graduating in 1993, she’s worked steadily as a professional actress ever since.

In 2000, Wendy first began working with Funimation as Amick Hendar in Blue Gender, and from there she just kept on going! Her most well-known roles include Ilena in Claymoire, Mukuro in Yuyu Hakusho, Miss Merry Christmas in One Piece, and as a “guest star” Popuko in Pop Team Epic! Of course, Wendy’s vocal transformations can be heard in so much more, including My Hero Academia, Overlord, Space Dandy, Fruits Basket, Case Closed, D. Gray Man, Fairy Tail, Sengoku Basara, Prince Adventures, Sgt. Frog, and… well, how much time do you have, because at over 120 titles, this list could go on for a while…

Wendy has also performed in video games such as The Gunstringer, Bloodrayne 2, Spikeout: Battlestreet, and as the enigmatic “Watcher” in Borderlands: The Pre Sequel. She confesses that, while she plays characters in video games… she’s kind of bad at actually playing video games. (^_^;)

Wendy’s passion for acting is matched only by her passion for teaching. For over a decade, she has taught middle school theatre, grateful for the opportunity to educate and encourage young actors. She also loves meeting people at conventions, which lets her share her love of acting in person. When not behind the mic or in front of the classroom, Wendy enjoys the outdoors, reading nonfiction, and floral design. She lives in Dallas with her husband, her seven-year-old son, and a menagerie of animal companions: a black Labrador, a white German Shepherd, a bearded dragon, a leopard gecko, and a turtle (named Crusher).